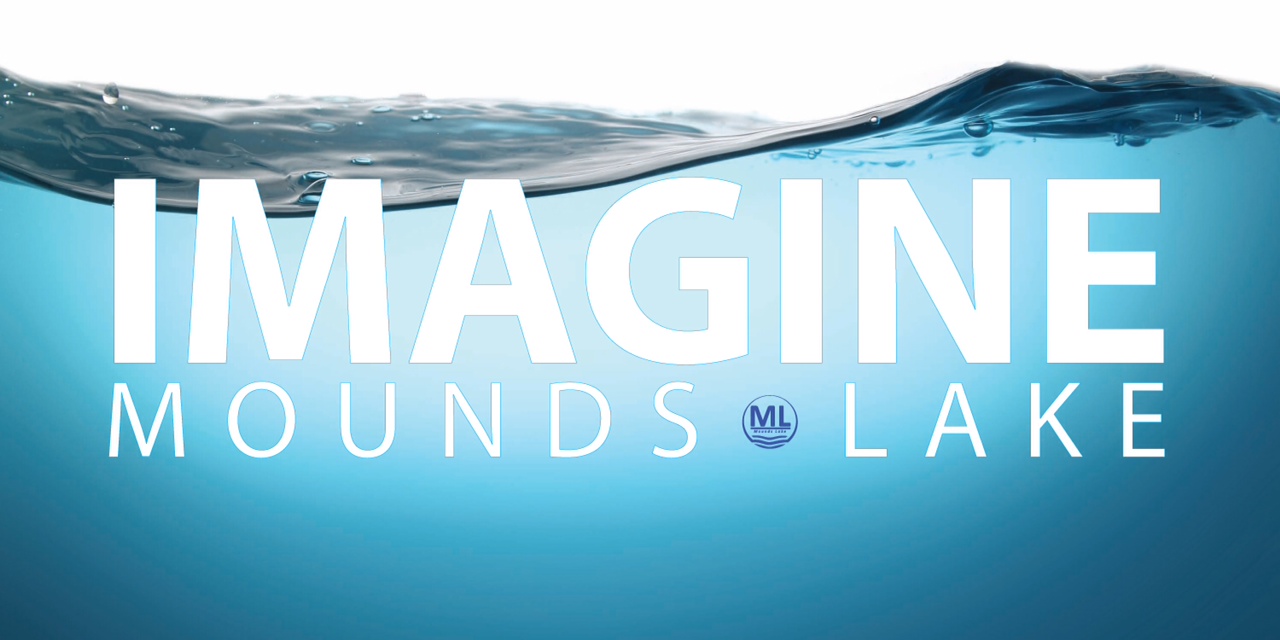 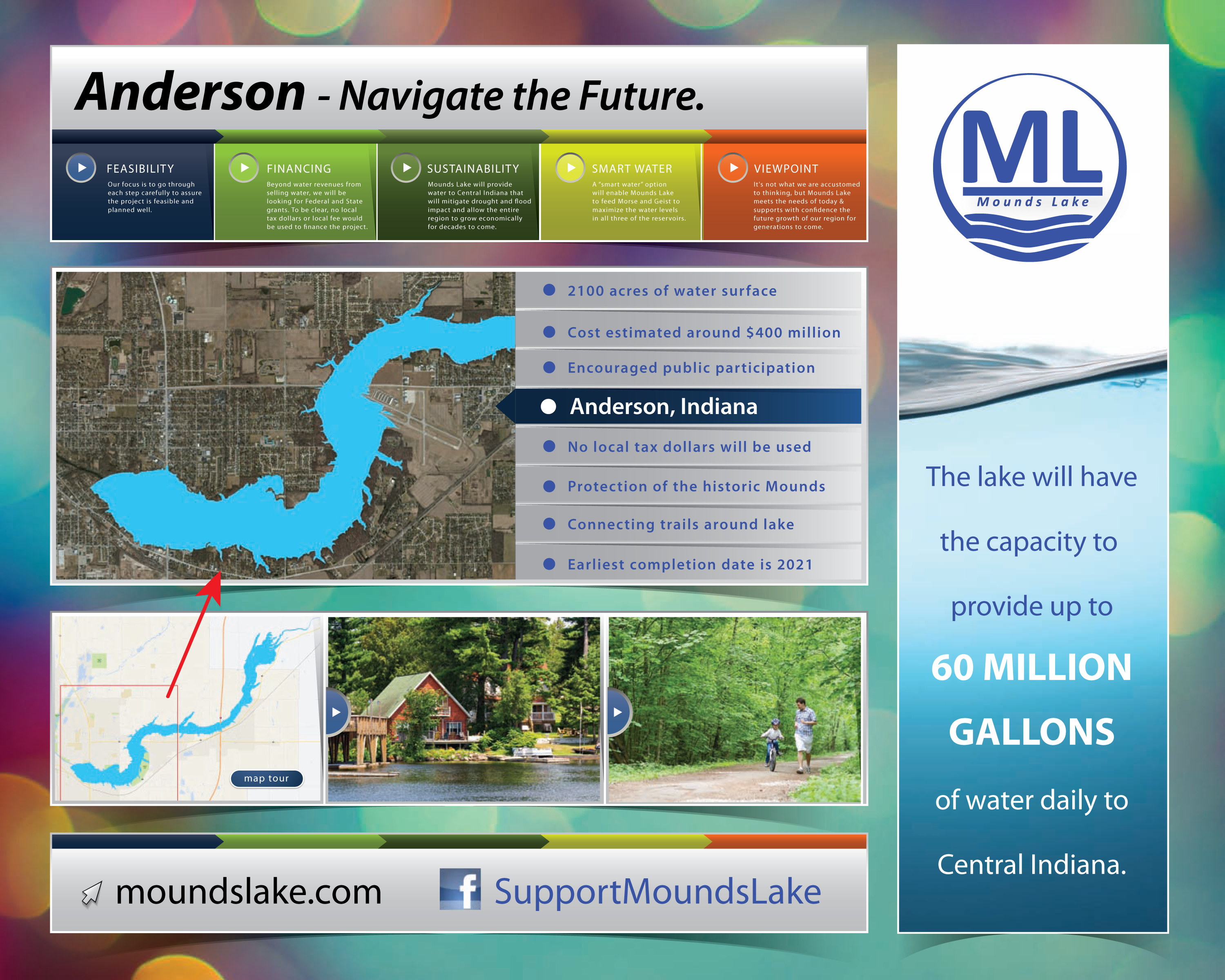 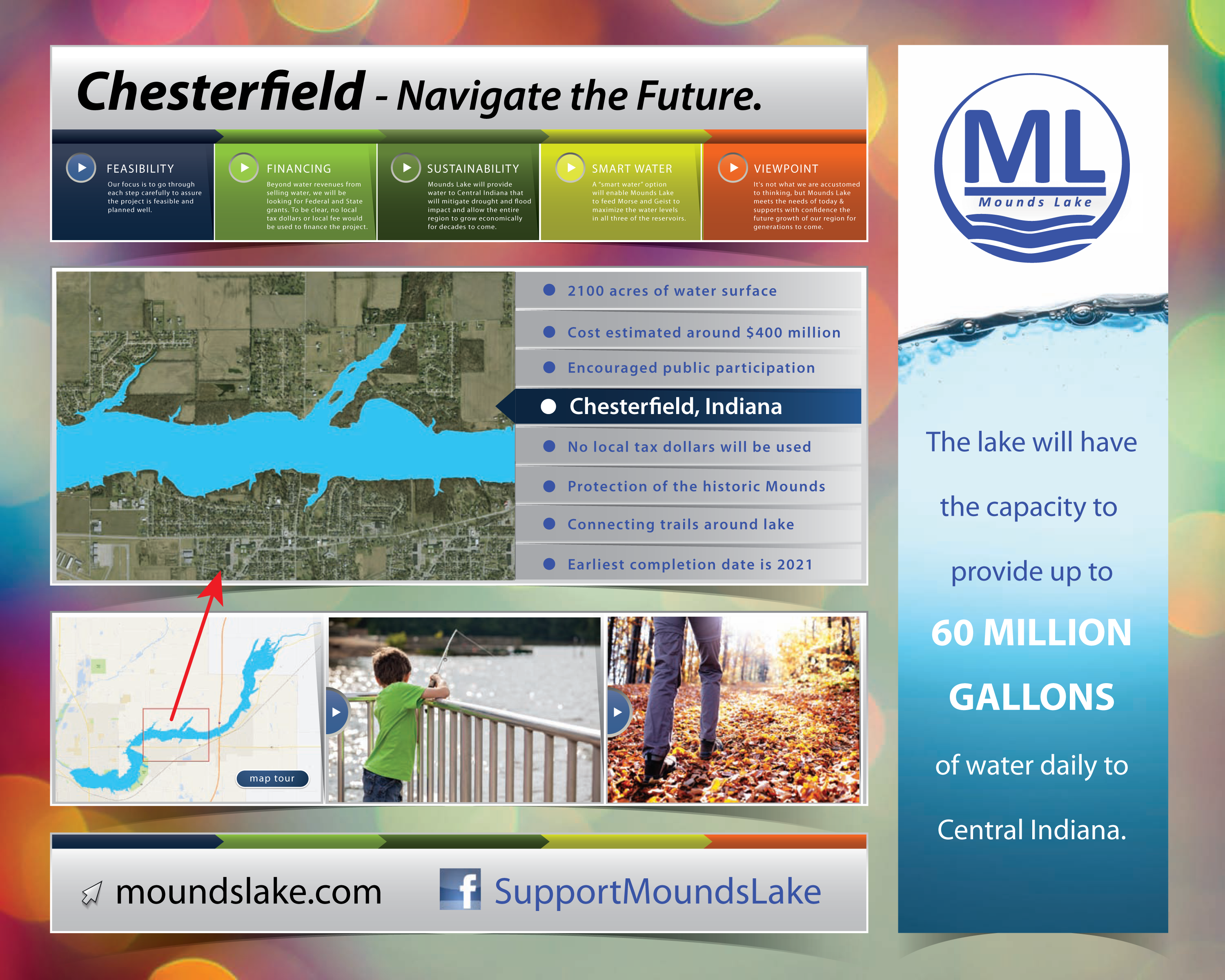 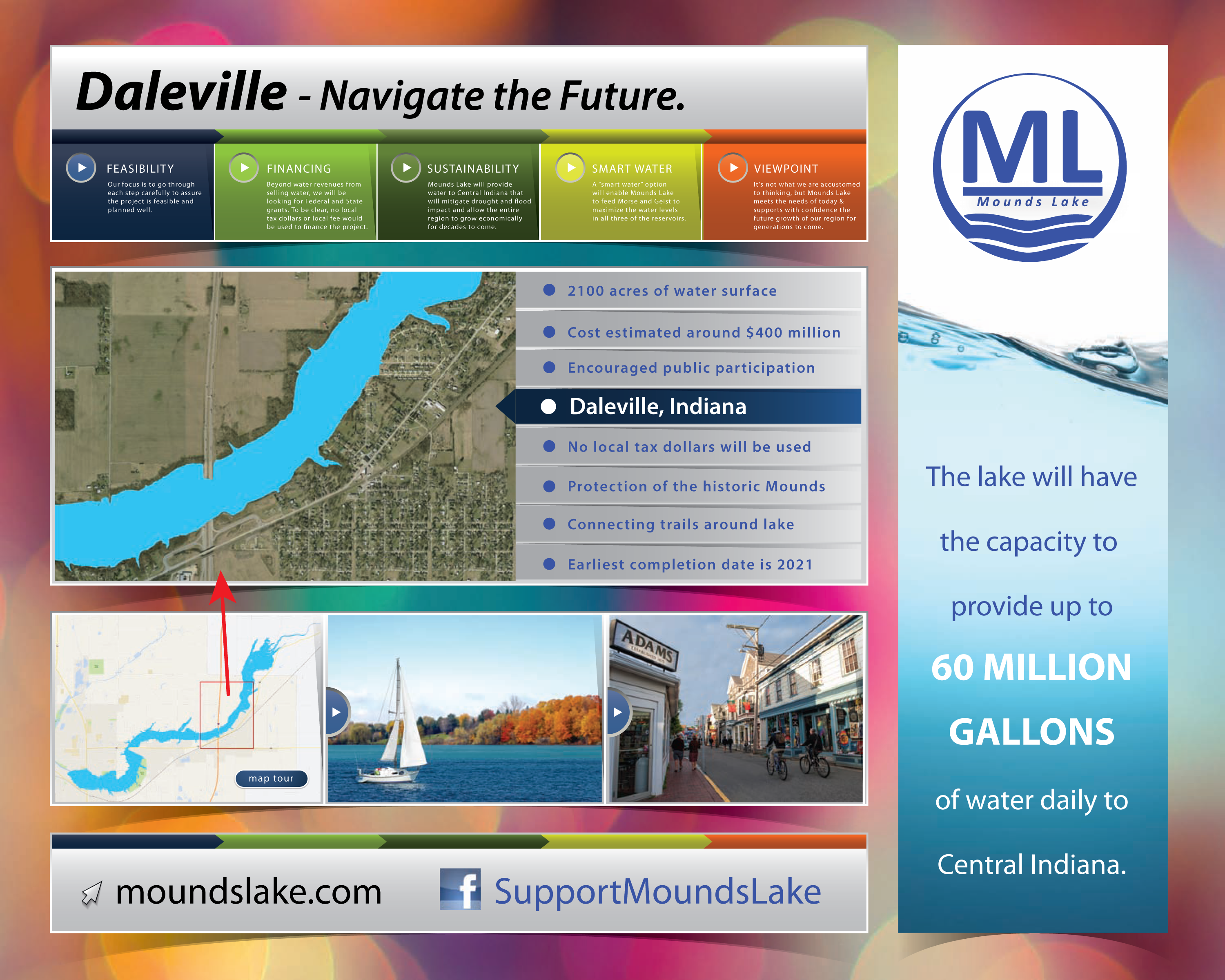 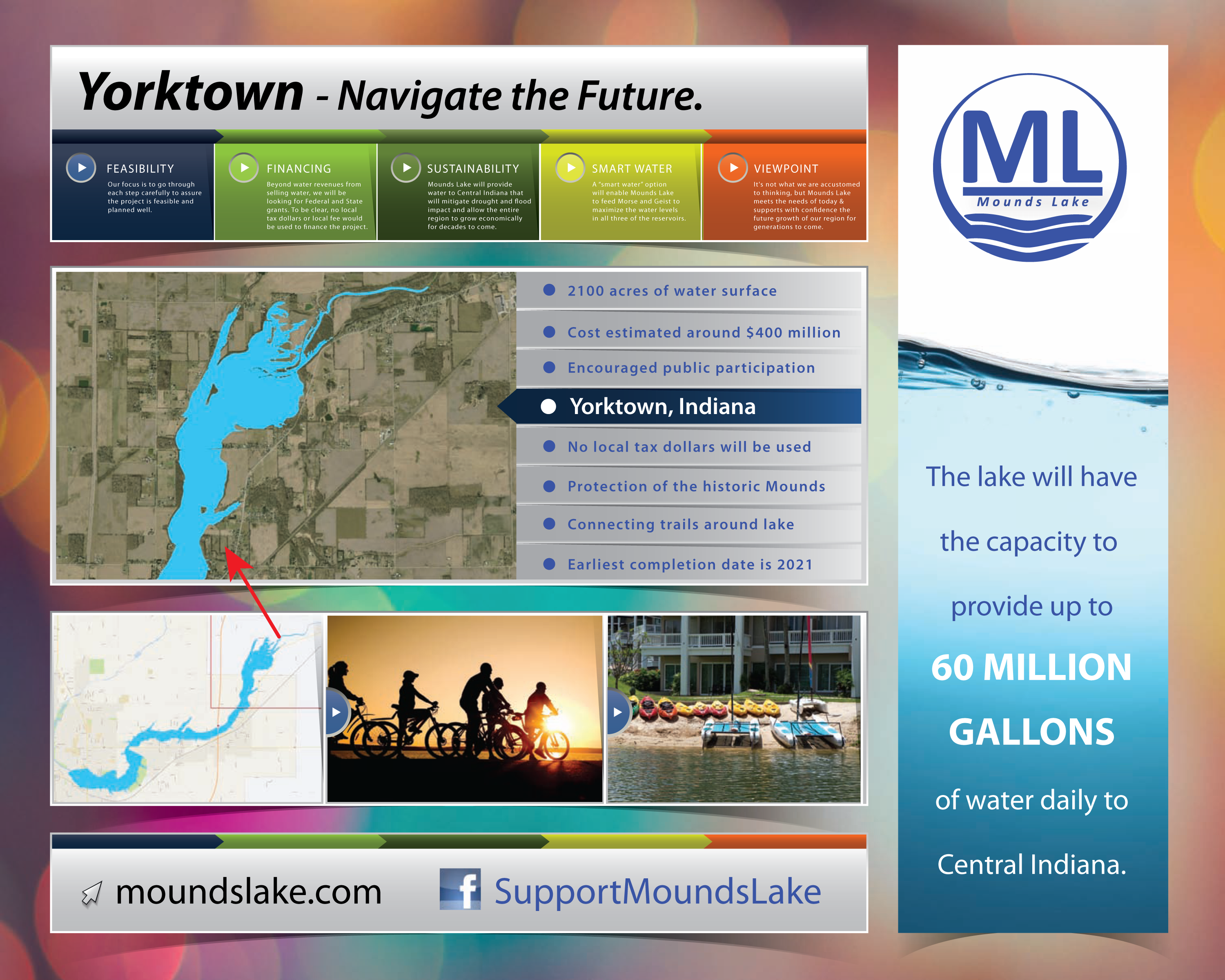 The Mounds Lake project began as an idea proposed during the 2010 Madison County Leadership Academy. Seeing the possibilities of a project of this magnitude, the Corporation for Economic Development for Anderson/Madison County contracted a Phase I study to determine the feasibility of a project of this size. DLZ Engineering of Indianapolis conducted an initial study in 2010 revealing the feasibility in constructing a 2,100 acre lake from Madison into Delaware County. With this information, the CED moved forward with Phase II of the Mounds Lake project in an effort to meet future water needs in central Indiana

Most of the residents and businesses in central Indiana depend heavily on three reservoirs for their water: Geist, Morse, and Eagle Creek

These reservoirs were designed and built between 1940 and 1970, when the population of central Indiana was around 700,000.  Today, that population has more than doubled to approximately 1.8 million residents.

If things remain as they are, experts predict a water shortage looming for this region of our state.

According to Indiana Department of Natural Resources (DNR) Water Data, about 70% of water withdrawals in 2012 for Central Indiana came from surface water from these reservoirs, and the rivers and streams that supply them.  About 30% of the region’s water withdrawals came from groundwater aquifers.

Drought conditions in the past years have heightened the awareness of water need, and better management of existing water sources in Indiana.

According to the Indy Chamber of Commerce 2010 Water Study:

“If no change occurs, the region will be unprepared for  future growth and unable to serve increasing demands in an  affordable and reliable manner.”

The Mounds Lake Project in Anderson would serve as a new water source for the central Indiana region.

The earthen dam for the proposed lake would house floodgates as well as a cement spillway.

Two locations for dams are being considered:

Given either location for the earthen dam, this would create a 2,100 acre lake with a pool height of  876 feet above sea level (making the lake about 50 feet deep at the dam and 9 feet deep north of Daleville).

Mounds Road, Scatterfield, Lindberg, Interstate 69, and 300 South would remain much like they are today, only higher, due to the configuration of the dam and the interstate.

The flow of the White River would continue during the construction of the lake creating no disruption to either upstream or downstream flows, while downstream flooding in Hamilton and Marion counties will be reduced.

The proposed Mounds Lake would impact public infrastructure, such as: sewer, water and power lines, telecommunication, roads and bridges, and even the airport runways.

Based on modeling from drought years 1940 and 1941 (two years where there was no measurable rainfall):

“Our goal with this project is to leave the environment better than before the project. ” — Rob Sparks

The primary focus of the Environmental Feasibility study procured by the Anderson (CED) centers around the concern of possible groundwater contamination from toxic dumps and/or past GM sites.

NOTE:  One of the goals of this project is to enhance the existing environment, while providing a needed regional water resource.

According to the Study performed by SESCO of Indianapolis, the following has been determined:

*More information will be forthcoming concerning the GM site and will be shared with the community as soon as it is received.

Public access with parks, trails, and art is another area of concern about the local development of Mounds Lake.  A number of ideas to provide recreation and cultural amenities to our community are being considered through the Mounds Lake project:

NOTE:  While many avenues of paying for this project are being explored, NONE involve local taxpayers.

Would include representation from the communities affected by the proposed Mounds Lake including:  Anderson, Chesterfield, Daleville, Yorktown, Madison County and Delaware County. 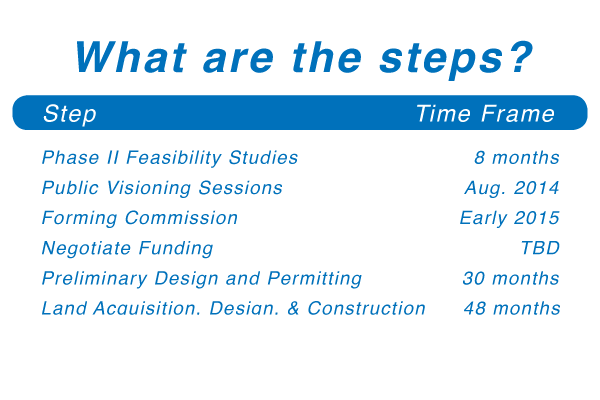 If you have any immediate questions, feel free to call or email. However, you may also want to message us on Twitter and Facebook for quick questions.

Ask your questions @MoundsLake.  Use the hashtag #NavigateTheFuture when talking about the project!